In recent years, bike light technology has gotten lighter, brighter, cheaper and easier to mount to an array of bikes. Blinded by too many choices? Read on to find the best bike lights and bicycle safety tips. 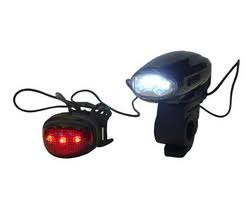 Cover your front and rear. Whether you’re riding home under the setting sun, the glow of streetlights or in total darkness, it’s important to always display a white light on the front and a red light on the rear.

Headlights: Before you buy a headlight, consider how it will be used. Do you need it to see or be seen? Inexpensive LEDs make poor headlights, but are effective at helping drivers see you. If you’re in an unlit area, consider using a dedicated headlight (more on that later) as well as a blinking white light. Look for an inexpensive LED such as a Knog, which offers a variety of highly visible lights in different flash patterns, including strobes. 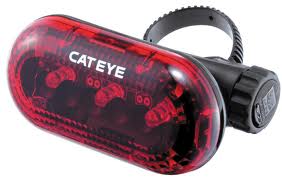 Taillights: Taillights typically mount to the back of your seatpost or seat bag. A light that’s longer and contains more LEDs is more visible than a single light. Blackburn and Cateye make a variety of taillights for commuters. Some even have a larger light pattern to provide side lighting.

If you ride with a bicycle trailer that attaches to the rear of your bike, make sure this attachment is ALSO lit up from the back and side.  Maya Cycle bicycle trailers and other brands provide a flag that attaches to the trailer so that it is visible when following your bike, attach a flashing light to your flag post if possible and in addition, use a flag that has a reflective material to help it’s visibility by motorists.

Other considerations. While the battery life of inexpensive LED lights has improved, it’s important to recharge or replace your batteries often and to know roughly how long the battery’s life is (don’t rely on the manufacture’s claim). If you have space, keep an extra light or extra batteries in your bag.  Also consider the size of your seat post and handlebars and be sure the light’s mount is compatible with your setup. 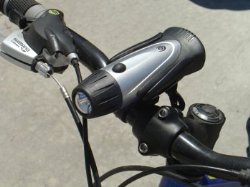 Light up unlit areas. If your bicycle commute takes you into dark areas, you’ll need to look into a powerful headlight, either a high-powered LED, HID or halogen. These lights, which mount to your helmet or handlebars, typically produce two light patterns, wide and narrow. LED lights are generally pricier than halogens, but they emit a brighter light and have a longer battery life. HID lights more resemble a car’s white lights and are very bright, but also quite pricey. Mountain bikers often opt for HIDs, which can be overkill for commuters and downright blinding to motorists.

Keep in mind that the lights have large batteries, which are typically stowed in a jersey pocket, bottle cage or on your frame. Look for a model with rechargeable batteries and conserve battery life by using the narrower light beam when possible. Always charge your batteries between uses, and keep in mind that the faster you ride, the brighter your light must be.