Every time I pedal up the hill near my house, he’s there. Yapping and jumping, his tiny legs run laps around the bike as I struggle to climb with my Maya Cycle bicycle trailer full of groceries. I call him Ninja Dog and even though we’ve met roughly 50 times, he still displays the same Mini Pinscher persistence that raises my heart rate in an instant. Luckily, Ninja Dog backs down as soon as I raise my voice and ride away from his yard.

Sometimes dogs and bikes don’t mix and commuting by bike can be challenging with a barking beast chasing you down the road. Here are a few bicycle safety tips on how to deal with a dog you don’t know or one who’s acting aggressive? 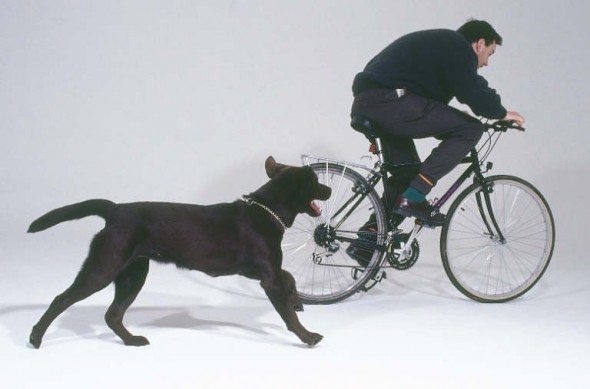 Begin with a firm command. You want to sound authoritative. “Stop!” “No!” and “Bad dog!” may be enough. I’ve also yelled, “get off the couch!” with some success. Some cyclists swear that just the opposite works as they coax the pooch in a soft voice. “Good dog.”

Know the dog’s MO. Most dogs put up a fight because they are either protecting their territory or see you as a giant squirrel that they can chase.  This is where some attitude helps. Make eye contact with the dog, prove that you’re not prey and safely move out of his territory. Also, try to ride through Fido’s lair at the same time as a passing car, when the pooch is less likely to chase.

Cue your sprinting legs. If the dog looks excited or like he’s just playing with you, stand up and sprint away from him as best you can. But if he has a look of aggression, cautiously sprint away until you have cleared his invisible territory. You can also try to throw the dog off by varying your speed. Approach him slowly and then suddenly sprint away.

Hit him between the eyes.  With water, that is. A sudden squirt from a water bottle will likely scare and surprise your attacker. I’ve had great luck with this one and it usually ends the confrontation immediately.

Watch your behind. Dogs like to approach from the rear and some dogs will start chasing after you have passed them.  If Fluffy tries to run beside you, guard your front wheel to keep from crashing if he runs in front of it. Scan for traffic and then veer into the road as you sprint away.

Protect yourself. If the animal is still aggressive, dismount and place your bike between your body and the dog. You can also carry a specific spray that repels dogs. If you are bitten, stay on the scene and call the police immediately.  You also have the right to report a dog that continually harasses you.