Air Pollution and Your Bike Commute

You’re not the only one. The United States emits more CO2 than any other nation except for China, reports cycling advocacy group Bikes Belong. On the flipside, bike-obsessed Copenhagen saves 90,000 tons of CO2 from being emitted annually. So how do we protect our lungs when we’re drafting tailpipes and sharing a bike lane with diesel-spewing busses? Consider these tips to reduce your air pollution intake on your bike commute.

You don’t have to venture far from the congestion to find relief from airborne pollution on y our bike route. Fortunately vehicle emissions quickly dissipate, so the greatest danger to your health exists when you’re stuck in the middle of a traffic jam or where air doesn’t flow freely. Google bike maps can help point you to local bike paths or suggest an alternate commuter cycling route that has less vehicle traffic. Get creative and consider cutting through college campuses and parks.  Try to exert your greatest efforts, like climbing a long hill, in less traffic-filled places. As your breathing deepens and is more frequent, you take in more pollutants. 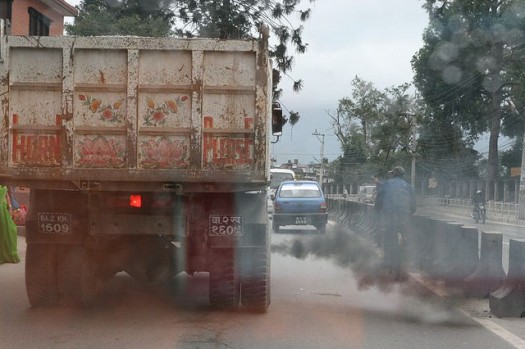 Instead of sitting directly behind a car at a red light either move up to the front of the intersection, if it’s safe, or just to the side of the car. Avoid following vehicles too closely and remain upright on the bike as much as possible. Also consider rethinking the timing of your bike commute to stay off the roads during peak hours.

If you live in a city with air pollution and you know you can’t escape the congestion, wear a mask to help filter out pollutants. An anti-pollution respiratory mask can filter out up to 95 percent of the fine particles like nitrogen dioxide and other volatile organic compounds, which can trigger anything from upper respiratory infections to headaches, and can even cause cancer.

Before panicking about your city’s air quality, which is still worse for motorists than cyclists, research what you’re actually up against. Consult www.airnow.gov for an air quality forecast or www.lungusa.org, a site that will tell you if your city or state is in compliance with clean air standards. If you’re looking to see what the top polluters are in your area or how pollution disperses over an area, visit www.scorecard.org. The Environmental Protection Agency also tracks certain pollutants and provides detailed air quality reports on their site: www.epa.gov.