The 2011 Toronto Bike Show was one of its best bicycle events this year.  It had a little bit of something for everyone, whether you are a touring cyclist, mountain biker, BMX junkie, commuter and/or if you just like to go for your occasional bike trip with the family every other weekend or so; you would find a variety of bicycles and accessories at this show. 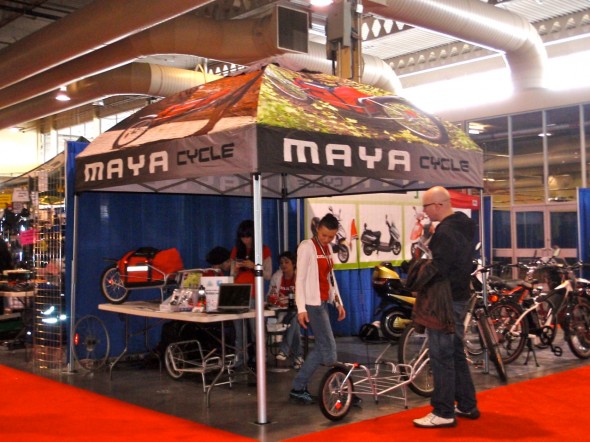 What exactly is the purpose of this show in Toronto?  Well, to get everyone who is interested in bicycle culture to come out to one place and buy new bicycles and accessories at discounted rates from Toronto and surrounding area’s local bike shops who want to sell old inventory to replenish their stores with new inventory.  To learn about what’s new and improved in the bike world.  To watch some phenomenal bike tricks and competitions; and of course to mingle with Toronto Bike shops and industry peeps.

There was even an artist by the name of Gilbert VandenHeuvel who displayed his hand made furniture pieces made from recycled bikes and parts.  Some of these pieces were absolutely exquisite and could make any bike enthusiast drool at the site of a bar stool and table set made from parts of discarded bikes.  It would be a shame if you didn’t check out some of the pieces they have, check out this barstool we fell in love with!

The show featured competitions such as the Flatland and BMX Jam, as well as indoor mountain bike championships and a fashion runway show.  No doubt the competitions would make anyone’s mouth drop.  The bleachers were packed with bicycle enthusiasts and fans, while the cheers would be heard through the entire building right out the entrance doors.

There were tonnes of amazing bikes that would suit your need as an avid cyclist or mountain biker, but for the commuter there were two that rocked my boat: The foldable Navigator offered by ‘The Mobile Bike Shop,’ and the Herskind + Herskind from ‘Cycle Couture.’

Troy Mitchell did not even have to sell me on the fact that it weighs under 30 lbs (which allows me to lift it with one hand), folds and disassembles to fit in the crevice between my book shelf and wall, the fact that it can be done within 30 seconds and the best part, it can fit in the Maya Cycle bicycle trailer so I can wheel it into my apartment. FANTASTIC!  Might I add that I am on a hunt for a new commuter bike so I had a hard eye out for this during the show. 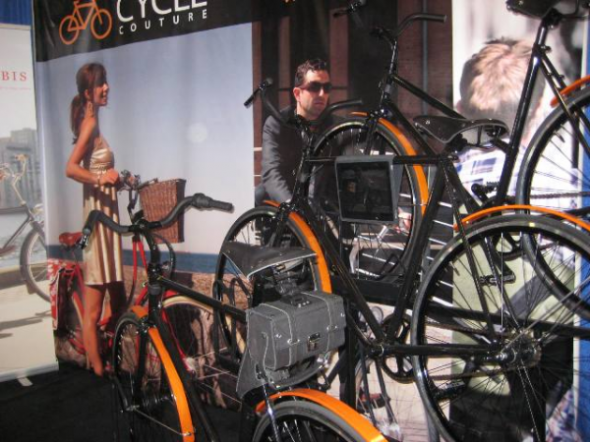 I had the pleasure of meeting Toronto’s newest bike shop owner, Jeff Scullion, who is opening up a new commuter bike shop in the College and Ossington area, set to open April 1st.  I am super stoked to have yet another bike shop in the neighbourhood, but this one solely focuses on the city commuter.  Scullion is bringing in the Copenhagen chic bike to our neighbourhood which is the only one of its kind in Canada.  With motorists adopting the hybrid vehicle trend years ago, one can only assume that the electric bike trend emerging within the bicycle industry is a ploy to attract motorists to give commuting by bike a chance.  The Herskind + Herskind bike is thin, fairly light and the battery pack fits in a beautifully designed little carrying case that sits under the bicycle seat.  Oh, if only I could I so would.

The one thing we cyclists and bicycle commuters need is the support of the city to make our streets safer for bicycle’s and those who choose the green way to get from here to there, not just because it’s less costly to us and our earth, but also because we love it.  But that’s another story all on its own.